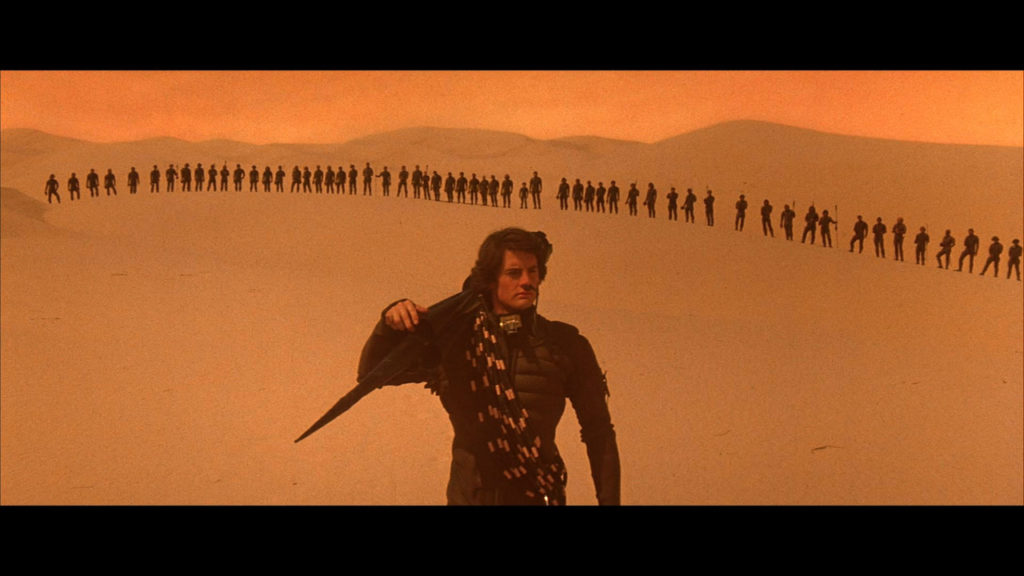 Leadership books don’t have to be your primary source of professional development. Fiction plays a critical role as it gives you concrete examples about people, behaviors, strategies and leaders, all wrapped in exciting stories. This is also true of science fiction. I recently read Frank Herber’s, Dune, and was struck by so many great examples of strategy and leadership. In effect, Dune is the story of a young duke, Paul “Muad’did”, who is forced into exile on the desert planet, Arrakis (which is also the most important planet in the universe for its natural resource, spice), and unwittingly becomes the leader of its indigenous people, the Fremen, all of whom are inching towards a global jihad against exploitative empires. Dune’s background and characters are impressive, and the story weaves together philosophy, relationships, behaviors, strategy, politics and leadership. Here are some great nuggets that I think really stand out.

Why you exist as a leader. Contrary to so much modern leadership literature that seems to focus exclusively on people and relationships, Dune reminds us that success as leaders ultimately comes down to accomplishing the mission. We also see that “leaders” are a combination of influencers, planners, managers and decision-makers.

“He [Paul] thought of the power he wielded…the old men who sent their sons to him to be trained in the weirding way of battle, the old men who listened to him now in council and followed his plans, the men who returned to pay him that highest Fremen compliment: ‘Your plan worked, Muad’Dib.’”

The book also reminds us that you don’t have to always be the leader of the team. In fact, one could say leadership is contextual, seemingly based on the principles of supply and demand.

“What is important for a leader is that which makes him a leader. It is the needs of his people.”

Your ROI as a leader is to effectively navigate and manage uncertainty. Only in this way can leaders effectively adapt to changing conditions.

“A Bene Gesserit axiom came to Jessica’s mind: ‘Survival is the ability to swim in strange water.’”

Effective leadership requires effective thinking, which requires the acknowledgement that you can learn in the first place. “Leaders are readers” is a common phrase that reinforces this necessity.

“For the others, we can say that Muad’dib learned rapidly because his first training was in how to learn. And the first lesson of all was the basic trust that he could learn. It is shocking to find how many people do not believe they can learn, and how many more believe learning to be difficult.”

You must learn to think for yourself. As a leader, you must learn to rely on experts to help you form your opinions, but don’t fall into the trap of relying on authorities to give them to you.

“Once, men turned their thinking over to machines in the hope that this would set them free. But that only permitted other men with machines to enslave them.”

Learn to see what things truly are and not what they appear to be. Midway through the novel, Paul is afforded the opportunity to choose a name of manhood among the Fremen, the indigenious people of Arakis. This young duke, who is an expert fighter and is on his way to leading a war against powerful houses in the universe, selects the name, Muad’Dib, the Fremen name for the mouse. This small, non-threatening animal carries a powerful image in the desert and reflects a theme running throughout the book, that of the necessity of accepting change and adapting to your environment rather than resisting it.

“I will tell you something about your new name,” Stilgar said. “The choice pleases us. Muad’Dib is wise in the ways of the desert. Muad’Dib creates his own water. Muad’Dib hides from the sun and travels in the cool night. Muad’Dib is fruitful and multiples over the land. Muad’Dib we call ‘instructor of boys.’ That is a powerful base on which to build your life, Paul-Muad’Dib… We welcome you.”

Keep it simple for everyone involved in the mission, especially when navigating turbulent times. Don’t confuse complexity with intelligence or cleverness. In fact, the execution of a strategy becomes more complex by the day, as issues and challenges seem to accumulate hourly. The best way to ensure success is by minimizing the friction others will face as they work to accomplish their tasks and goals.

“Give as few orders as possible,” his father had told him…once…long ago. ‘Once you’ve given orders on a subject, you must always give orders on that subject.’”

Identify your competitive advantage. Like businesses, armies and nations, people too can specialize and excel in certain areas. Identify yours, stick to it and excel in it. Let your success be a motivating force for others to identify theirs and excel in them.

Life – and success – demands constant progress, energy and action. The necessity for individuals to advance in mind, spirit and body is clearly another theme running throughout the book. As a leader, or especially an entrepreneur, your willingness to stretch yourself intellectually, even physically, will greatly support your professional success.

“And always, he [Muad’dib] fought the temptation to choose a clear, safe course, warning ‘That path leads ever down into stagnation.’”

Likewise, be aware that excessive success can breed complacency in you and in your team.

“We came from Caladan – a paradise world for our form of life. There existed no need on Caladan to build a physical paradise or a paradise of the mind – we can see the actuality all around us. And the price we paid was the price men have always paid for achieving a paradise in this life – we went soft, we lost our edge.”

Understand the impact of behavior, culture and values. These “soft” factors are force multipliers for your team. If your people truly believe in the cause, there is nothing they won’t do for you. Also, you can count on them acting on their own initiative, doing what needs to be done without your prodding. These conditions can only serve you as a leader.

“She had quoted a Bene Gesserit proverb to him: ‘When religion and politics travel in the same cart, the riders believe nothing can stand in their way. Their movement becomes headlong – faster and faster and faster.’”