Is Orson Welles an Emergent Leader?

Is Orson Welles an Emergent Leader?

What a fantastic documentary. I watched it twice, two nights in a row. I have to say this doc is incredibly important, first-and-foremost, for anyone interested in entrepreneurship or who is an artist or even somewhat creative. The doc is essentially about the attempt to actualize a creative vision. Probably the most interesting element was unspoken: emergent leadership. If you a leader that has a creative streak to you, then I recommend watching it on Netflix.

The one constant element of the emergent strategy is the fluidity of events, the changing dynamics that influence our perception – and our emotional responses – regarding the mission at hand. I can’t recall a movie or documentary that demonstrates an emergent strategy so well. This strategy, and these conditions, are what Orson Wells experienced attempting to make his last movie, The Other Side of the Wind. The concept of the movie is fascinating, but I have not watched it on Netflix.

That’s what Orson Welles relied on as a director. Success for a movie did not necessarily lie in the script. Neither was it the deliberate planning for making a great movie. Rather, success begins with a broad vision, which Orson Welles suggests a general framework of a movie. For him, success depends on creating a general framework that prepared scenes can be dropped into. From there, the creativity of the actors is summoned. Whatever the combination is for the actor, be it in the moment or allowing people to become so comfortable that they become one with the scene, something would happen. Accidents that fall from heaven, more likely unconscious acts that make the scene wonderful or truly create unforgettable performances. This approach is what Orson Welles relied on as a director. This appears to be his MO. In a sense, it is an emergent strategy: a slow, incremental progression towards something that should be. And in this case, this approach didn’t work for him.

The emergent strategy is simple: one is dependent on leadership in execution in the absence of a deliberate thought process to help strategize a way forward. In a sense, you need to be successful at “making it up” as your go. To the artist, this sounds like fun. To the investor it can sound like a nightmare. Apparently this is the image that his investors had, whom eventually lost confidence in his ability to finish the project. Consider the appearance of this model of strategy: the constant change in scenes, actors and scripting looks more like pandemonium than sober decision-making. The image is that not that the core of the story is developed and minor details are being adjusted, but rather that a Heraclitean Flux is going on, and your money and time sinks into it.

There is a premium on leadership in the emergent strategy. Hence, we can call this model of leadership – the model of repeatable improvisation – emergent leadership. It’s hard and it’s tough on people. Notice the detoriation of relationships among the actors and Orson. Observe the financial stress. This element really stood out to me being an entrepreneur. That’s why I see so many enterpreneurs as emergent leaders because they have to improvise, they face the severe ups and downs as they progress. Success and failure seem to both be on the horizon. It’s challenging.

If this blog makes sense to you, and even if the topic interests you, then check out the documentary, “They’ll Love Me When I’m Dead.” Soooooo good. 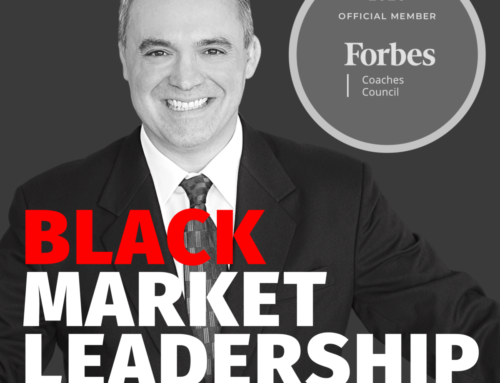 Black Market Leadership, Podcast #1 – The Why